This Philly cheesesteak stuffed pepper recipe is the perfect alternative to the traditional sandwich if you are eating low carb. It’s a quick and easy recipe to make for a weeknight dinner, and if you don’t polish off the entire dish, it makes for great leftovers the next day. Or make them over the weekend to have several days of healthy, filling lunches ready to go. Philly cheesesteak stuffed peppers are also a great potluck dish. You can double or triple the recipe easily, and they reheat well. 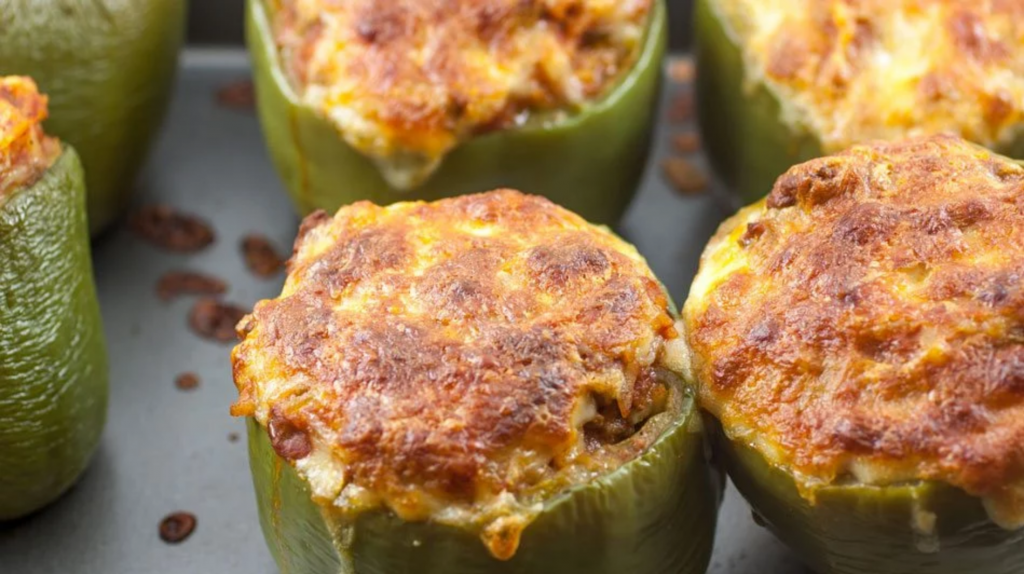 Philly cheesesteaks are all about the meat and the cheese, so make sure you get good provolone cheese and thin sliced roast beef at the deli. While we use green bell peppers in this recipe, you can always substitute red pepper halves.

Remove the tops of the peppers and take out all the seeds. You can do this prep while the onions and mushrooms get all tasty and caramelized in a large skillet over medium heat. Toss the roast beef strips in the vegetable mixture to heat and you’re ready to stuff the peppers.

Put the peppers in a baking dish. Lay a slice of provolone inside each pepper, add the meat and veggie mix, then lay another slice of cheese on top. Bake until the peppers are tender and the cheese is that perfect brown on top. Then enjoy your healthy comfort food!

In a large skillet melt the butter over medium heat. Add the onions and the mushrooms and cook, stirring occasionally, until mushrooms and onions are caramelized, about 25 minutes. Season with salt and pepper.

Add the roast beef to the onion mixture and cook 2 minutes. Remove from the heat.

If the peppers still seem crunchy, bake for another 5-10 minutes. Make sure the roast beef is sliced thin when you get it from the deli counter or from a package. This will make prep so much easier!